New tech is making a difference on America’s farms

Robby Schoepflin is flying his grandfather’s 1966 Cessna 172 low and fast along wheat fields in northwestern Idaho. The fields are shorn, and the only crop yet to be harvested on this late autumn afternoon is garbanzo beans. Dry and ready for harvest, they, like the shorn wheat, are yellow, gilding the landscape. The contrast between Schoepflin’s teal-and-white airplane and the yellow fields is like something from a Norman Rockwell painting—America’s farm belt on display in all its golden glory, and a man and his aircraft making holes in a brilliant blue sky.

The SenseFly eBee Ag drone has an electric motor, rechargeable lithium-polymer battery, and rear-facing propeller. The drone is made of a light, engineered plastic foam, and weighs less than two pounds. Its 2.4-GHz radio link communicates with the eMotion software via a USB ground modem. The software displays the drone’s flight parameters, its battery level, and its image-acquisition progress in real time. Artificial intelligence inside the drone’s autopilot continuously analyses onboard IMU and GPS data to optimize the drone’s flight. A near-infrared (NIR) camera is standard but multiple camera options are available. NIR data is used to provide the normalized difference vegetation index, a numerical assessment of crop condition. Other cameras can compute indices such as chlorophyll estimation, create topographic field maps, measure water distribution, and check irrigation. The drone can photograph hundreds of acres in one flight. 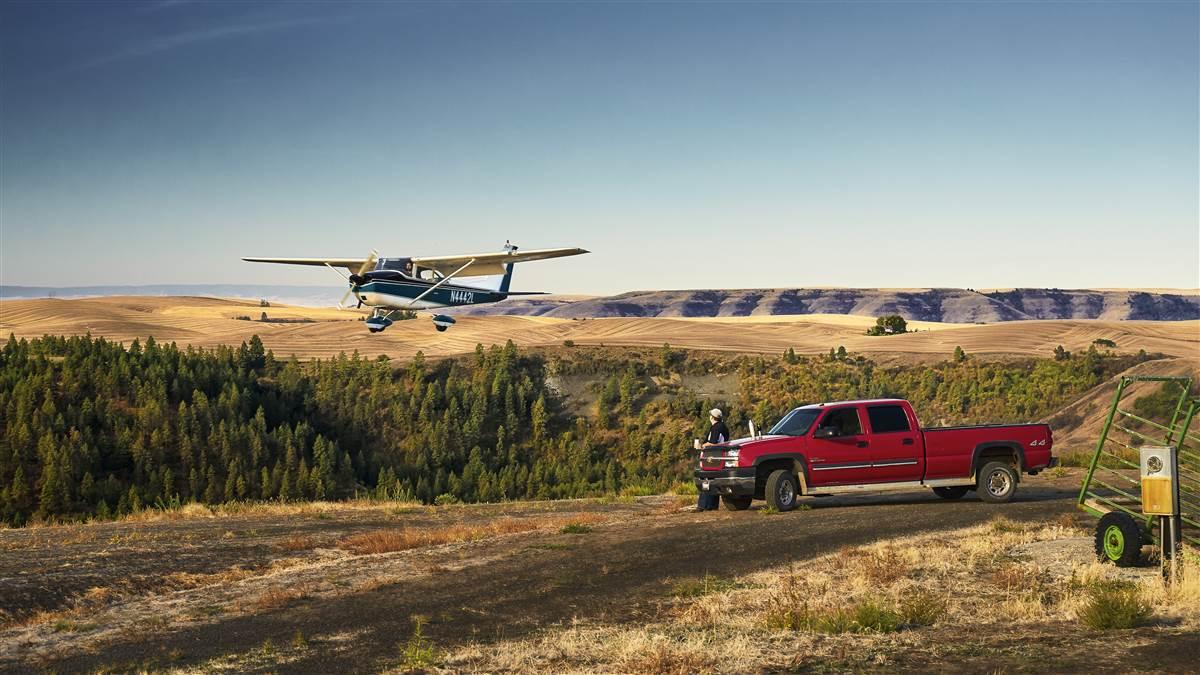 Schoepflin grew up around aircraft on his father’s airfield in the Palouse, an area in southeast Washington and northwest Idaho. The origin of “Palouse” is unclear; it probably is from a Native American tribe, the Palis, and translated to roughly mean “land with short, thick grass.” The Palouse, situated north of the Snake River, is known for its fertile hills and prairies. But this geography lesson doesn’t matter much to Schoepflin, aside from the fact that he loves this land and married a girl from the Palouse here last year. It is even more meaningful because it’s where his father, Dale, built the airfield—Schoepflin Airport (WN26)—and Dale’s Aircraft Services. His father died at age 66 in 2015. The younger Schoepflin had bumped around the northern parts of the United States in various jobs before coming home to make sure his father’s legacy remains intact.

Schoepflin is a pilot and mechanic. He’s flown these fields most of his life. But now he has an additional role—he is a pilot for a company called Measure, which supplies drones for agricultural use. He was tapped for this job by local farmer Robert Blair, whose life in the wheat fields of Idaho has been turned upside down by this new technology—just as the young pilot’s has been.

Blair is a farmer. He is also, he says, an accountant, clerk, payroll manager, janitor, carpenter, veterinarian, and soil scientist, among other things. “A farmer is a jack of all trades,” he said. “I can’t afford to hire all those needs. I had one hired man and two boys.”

Had, until Measure approached him and wrote his new job description. But let’s back up. Blair Three Canyon Farms has been in Kendrick, Idaho, since 1903 and Blair inherited his 1,300 acres from his aunt and uncle. He grows wheat and legumes, just as his uncle did, but he has a different way of looking at things than his uncle. In fact, his uncle forbade him from using even a computer for calculations, and threatened to disinherit him if he did. All financials for the farm were written in longhand until the late 1990s. A graduate of the University of Idaho, Blair couldn’t stop thinking things could be easier.

In 2004, Blair flew over his farm for the first time in a general aviation aircraft. “I thought, wow, what am I missing from the ground?” he said. “This is the missing piece.” Then he saw an advertisement in a farm journal for a “crop cam,” a precursor to a drone. “I was the first farmer in the United States to use one,” he claims. Photos and local newspaper articles on the wall in his modest office suggest that he probably was. Blair and his two sons built his version of a crop cam soon after. “Farmers,” he said. “We build stuff.”

This began Blair’s interest and movement toward “precision agriculture”—which, using drones equipped with sensors and cameras, allows him to see every detail of his farm and the crops growing there. “It’s simple mapping; it’s using technology on the farm,” he said. “A farm is a business. I need to know what’s wrong, where it’s wrong, and when to do something. It’s different, but not upsetting. I actually look like a genius.”